How does the balance system work?
The body’s balance system works through a constant process of position detection, feedback and adjustment using communication between the inner ear, eyes, muscles, joints and the brain.
Deep inside the ear, positioned just under the brain, is the inner ear. While one part of the inner ear enables hearing, another part, called the vestibular system, is designed to send information about the position of the head to the brain’s movement control centre, the cerebellum. 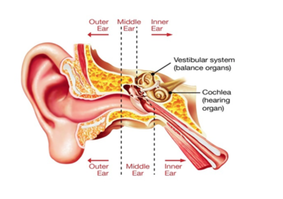 The brain’s movement control centre
The cerebellum is a small part of the brain positioned at the back of the head, where it meets the spine, which acts as the body’s movement and balance control centre. It receives messages about the body’s position from the inner ear, eyes, muscles and joints, and sends messages to the muscles to make any postural adjustments required to maintain balance. It also coordinates the timing and force of muscle movements initiated by other parts of the brain.
​
Position feedback from the inner ear
The vestibular system in each inner ear is made up of three semi-circular canals and two pockets, called the otolith organs, which together provide constant feedback to the cerebellum about head movement. 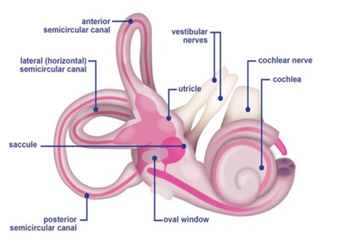 Each semi-circular canal has a different orientation to detect a variety of movements such as nodding or rotating. Movement of fluid inside the canals caused by head movement stimulates tiny hairs that send messages via the vestibular nerve to the cerebellum.
The two otolith organs (called the saccule and utricle) send messages to the brain about body movement in a straight line (backwards/forwards or upwards/downwards) and also about where the head is in relation to gravity, such as tilting, leaning or lying down. These organs contain small crystals that are displaced during these movements to stimulate tiny hairs, which transmit the message via the vestibular, or balance nerve to the cerebellum.

Position feedback from eyes, skin, muscles and joints
The vestibular system (inner ear balance mechanism) works with the visual system (eyes and the muscles and parts of the brain that work together to let us ‘see’) to stop objects blurring when the head moves. It also helps us maintain awareness of positioning when, for example, walking, running or riding in a vehicle. In addition, sensors in the skin, joints and muscles provide information to the brain on movement, the position of parts of the body in relation to each other, and the position of the body in relation to the environment. Using this feedback, the brain sends messages to instruct muscles to move and make the adjustments to body position that will maintain balance and coordination.

If any of these systems isn't working right, it can affect balance.

Reprinted with permission from Royal Victorian Eye and Ear Hospital.